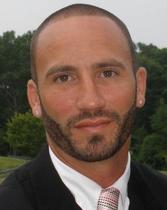 Christopher Ortiz was born and raised in Waterbury, CT. He graduated from Crosby High School and Southern Connecticut State University with his bachelor’s degree in communications. Before he began his teaching career, Christopher followed his dream of playing professional football in the   NFL. He was a wide receiver for the New England Patriots, the Kansas City Chiefs, & the New York Giants. He finished his football career by playing professional arena football for the New England Sea Wolves and the New Haven Ninjas.

He began working as a crisis counselor at Waterbury Adult Education and eventually started tutoring and teaching math. Christopher’s love for children and education brought him into his current position as a Spanish teacher at Sacred Heart High School in 2003.  He has maintained the position as the assistant varsity football coach for eight years and head coach for two. He is also in his seventh year as the boy’s varsity tennis coach. Christopher continues to guide and mentor his student athletes both on and off of the field.

Chris is married to Jennifer Ortiz. Together they are raising three sons, Dwayne, Christopher and Cameron